Marching in style—firemen’s uniforms over the years

Posted on February 17, 2019 by villiscahistory

Back in the early days in Villisca, as well as in neighboring towns and across the entire state, being a member of the local volunteer fire department meant a lot more than “simply” putting out fires that threatened to burn down your town. Oh yeah.

It meant putting on a fancy uniform and marching in parades during the summer. It meant competing for prizes in lots of categories, from largest number of firemen in the marching group, to how classy the marchers looked.  It meant racing against neighboring fire cart teams; climbing ladders faster than the competitors; and laying out hoses and attaching nozzles faster than anyone else. Even the fire chiefs competed, racing each other over designated courses.

There was more than pride and bragging rights involved. There was cash money at stake—which wasn’t so easy to come by in the 1880s and 1890s or even in the teens of the next century. And for volunteer fire companies like Villisca’s, cash meant better equipment and safer towns. And yes, it has to be admitted, bragging rights too.

But first you had to have the uniforms.

The first record of parade uniforms for the Villisca Volunteer Fire Department was in a news story about Villisca’s 1887 Fourth of July celebration. The parade was too short, according to the Review, but “the brilliant hues of the Fire Co. parade suits helped make up the deficiency in numbers.” The article also noted that the Fire Department also had handsomely decorated their hose carts and ladder truck.

There’s no record of when the “boys” got their brightly colored uniforms, or even what colors they were, but by 1891 they had appointed a committee to select and buy new uniforms. They decided to go with more sedately-hued outfits this time, choosing cadet gray pants with a black stripe down the leg, a box coat with brass buttons and a strap inscribed with “Villisca” across the chest. The fire company bought 15 new uniforms in 1895, but those probably were just additional uniforms because 15 wouldn’t have been enough for the entire company. 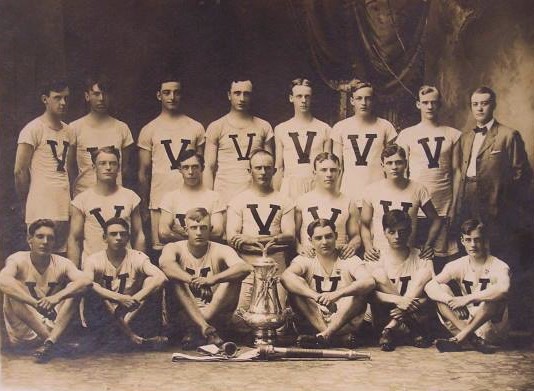 By 1904 the men were once again looking for new uniforms, and were actively fund-raising to help buy the new outfits. By August the handsome and attractive new uniforms had arrived in Villisca and the “boys” wore them for a local event to show them off. They also had their hands out for contributions to help pay the $469 the 40 new uniforms had cost. As the Review noted “it is the fire department that protects your property and reduces your rate of insurance, and it is your duty to assist in supporting an organization of this kind. Every property owner should give something.”

Forty firemen dressed in what were described as their new uniforms of handsomely trimmed red, went to Corning to attend the Tournament there. The Villisca boys expected to win first prize, but Red Oak had more men in line, so Villisca only took the second place prize.

It wasn’t long after this, however, that the Southwestern Iowa Firemen’s Association fell apart and the need for parade uniforms for the local firemen ended. The fire company turned to funding specialized clothing to wear as they battled blazes instead. As a result, the 1904 uniforms seem to be the last of their kind purchased. Although maybe not. Is handsomely trimmed red the same as wine-colored? If not, then there was yet another set of uniforms purchased without being reported in The Review. 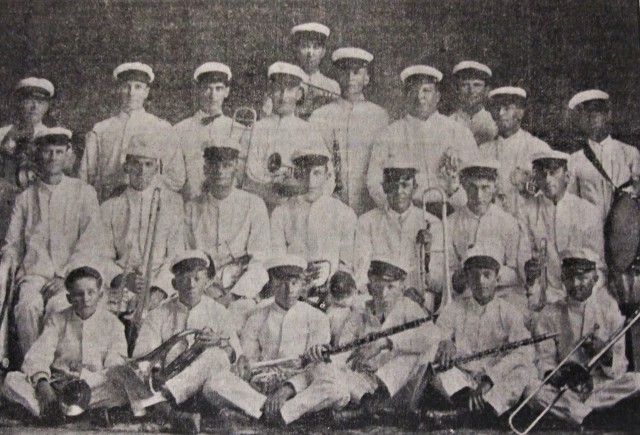 The fire department also bought other types of uniforms for the men too. A postcard from that era shows the Villisca hose cart team competing in a Firemen’s tournament in town and the “boys” were dressed in track-style outfits. The 1908 Villisca Firemen’s hose and ladder competitive team had pretty jazzy uniforms for their championship reign…including cleated shoes. In the teens of the last century the firemen also had a well-respected band, which also needed uniforms. They had snappy white uniforms for their concerts and also wore the regular firemen’s parade uniforms when they were marching. 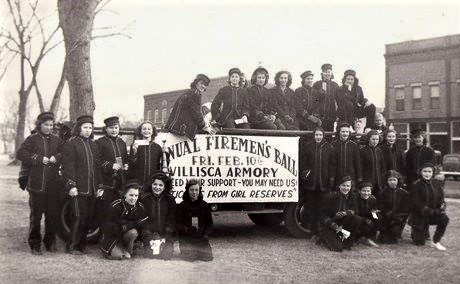 The last firemen’s parade uniforms made a couple more public appearances though decades later. In 1940, the Girl Reserves, who were in charge of selling tickets to the annual Firemen’s Ball, donned the old firemen’s uniforms and posed with a banner in the city park as an advertisement for the event. Norma Query Frey, who was GR president the next year, remembers how those wine-colored wool firemen uniforms itched! It’s a great photo though.

And then in 1941, a final item about firemen parade uniforms appeared in the Review:

“Some local children this Christmas will have warm mittens and snow suits made from uniforms worn by the Villisca firemen in earlier years. The old parade uniforms which are wine in color recently were donated by the Villisca Fire Department to the NYA [National Youth Administration] sewing room and have been made into attractive snow suits and mittens by the girls under the direction of Mrs. Agnes Coffman. The uniforms were worn by firemen here in the days when it was the function of firemen to visit other towns during the summer and stage drills, parades, and other exhibitions.”

Then, as always, the Villisca Volunteer Fire Department had the citizens of their town covered!

Editor
View all posts by villiscahistory →
This entry was posted in VHSI Categories. Bookmark the permalink.